Are Side Chicks Really Winning?? 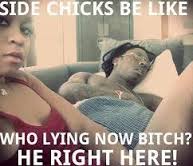 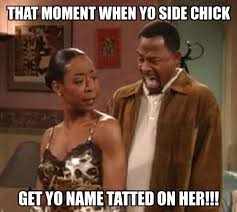 "Side Chick"....... aka the other woman, mistress....female who is neither the man's wife, girlfriend or significant other who is having relations with the man while he is in a relationship. Just from the definition alone, it seems the side chick has already lost. But there are definitely some females who believe that side chicks are winning and are more prominent in a man's life than even his  wife or girlfriend.  Yeah.....these chicks have some major balls now! My question is....what is it about this man that makes you feel that you would be content with second place just because you are so desperate for a man. Are self-esteem levels so low that you think having a piece of a man is better than having no man at all? These are things that I question when it comes to side chicks. And believe me.....I know a few. They make the side chick life seem so glamorous yet they always seem to be depressed and broken.  That is.....until their "lover" finds a few minutes on lunch to spend with them, to buy them a meal and make plans on when they can hook up for sex.  Are side chicks really winning???
Now don't get me wrong....there are some side chicks that are profiting big with gifts and trips.....but please believe.....if you are an "average" side chick messing with an "average" man......you not getting much. Yeah, you may think that necklace is a nice gift and he is showing that he cares, but trust and believe.....that main chick just got something that will put your little chain to shame.  And while you bragging about the lovely evening you had out on the town, he is planning a trip to Hawaii with his main.  Are side chicks really winning??? 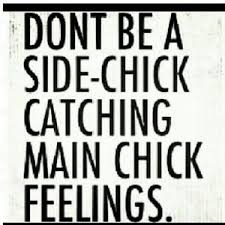 I also have to question..... what happens when the side chick starts to catch feelings. Its inevitable. Unless this is what you do for a living.  Do you screen shot text and send them to the main? Do you send suggestive anonymous emails to alert your lovers main chick to his little indiscretions.  Or do you walk away with the little self esteem and pride you have left and begin to make yourself a PRIORITY instead of an OPTION.
But then again....look on the bright side.  Side chicks sometimes (but not often) are able to win the heart and love of their part time lover and even marry them (as we saw on Love & Hip Hop).... but that was a total train wreck because even as the now so called "wife" ..... she was still in the shadows as the side chick. I really felt bad for her..........NOT!!!! LMAO!!!! Oh well.....If all else fails.....get a tattoo so you know its real!!!! Sorry.......Side Chicks are NOT winning!!!!

Side Note: If you think being a side chick is the route you want to
take then here are some tips on How to Be A Side Chick. You may find these helpful! #KnowYourRole Just click on the link below:
http://m.wikihow.com/Be-a-Side-Chick
Posted by CollieNicole at 8:41 PM 2 comments:

IS VALENTINE'S DAY JUST FOR THE WOMEN?

Valentine's Day.......the day set aside to celebrate love!! Although we should celebrate love throughout the year, people make a special effort to show their loved ones, significant others, crushes, etc..... how they really feel.  With all the stores displaying the flowers, candy, and other romantic items for this day, does it make you feel that Valentine's is a day to only celebrate the women? I have had female friends tell me that they were not getting their significant other anything for Valentine's Day and suggested that Valentine's is day is specifically for women. My first thought was ...really?? Because I had been pondering over a gift for my significant other and now was thinking Yesssssss!..... I'm off the hook now! I asked my significant other if he thought that Valentine's is just for women. His reply was that he doesn't think men will get upset if they don't receive anything.  In my opinion, I've always viewed Valentine's as a day that is all about expressing love and since men are often the ones who don't express their emotions often, this day is set aside to display all that love stuff and not have to be subjected to ridicule by the guys! The commercials even display countless women being surprised by jewelry and other gifts so is it really our day ladies? 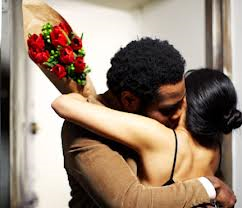 My thoughts.....do what you feel in your heart to do. Rather its buying a gift, cooking a special meal, going out for a fun night......its whatever you choose to do. Just make sure that special someone knows how you feel. Not only today......but everyday!!! Happy Valentine's Day everyone!!!!** Don't forget to comment and tell me your thoughts......Is this really a holiday for women or no??**

Posted by CollieNicole at 7:50 AM No comments: